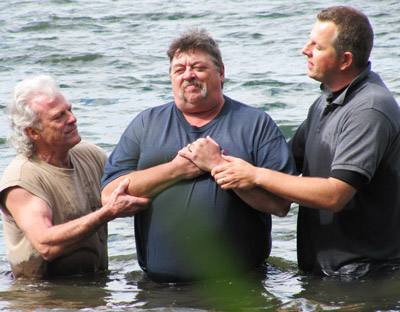 In November 1838, eight members of Gilmour Memorial Baptist were baptized in the frigid waters of Chemong Lake, just a few kilometers away from the country church. This September, 175 years later, nine members of the church returned to those same cold waters to proclaim their faith through baptism.

During a vibrant worship service that filled the small church, those being baptized began to share their stories. Some were teenagers whose journey with Christ had just begun; others were in their sixties who had seen God at work for decades. A common theme arose: the wonder of God’s hand at work in their lives. In each story, specific people or circumstances, both the good and the bad, awakened their pursuit of Jesus and drew them to this moment of baptism.

One couple spoke about God’s redeeming work in their marriage when they committed to lose their lives for Christ. The youngest member, who is six generations removed from one of the founding members baptized In 1838, spoke about how he was impacted by Pastor Ben Denhoed’s recent sermon about embracing one’s godly heritage.

Pastor Ben Denhoed felt blessed and privileged to baptize these individuals, praising God for his constant work in peoples’ lives. “I was away a little more than normal this summer due to vacation and mission work,” Denhoed recalls. “But God was not away … He was lovingly doing His work in the hearts of these folks from Gilmour, using people, situations, and divine encounters. God reminded me that He is constantly at work in people’s lives – whether I’m around or not.”

After the time of sharing, the gathered group traveled to the lake. The Gilmour church family let out triumphant shouts as each person was raised out of the cold waters into new life, praising God for his constant faithfulness.

One thought on “Baptised in Chemong Lake”